Kapsuli, which launched in 2014, is a social media tool for Twitch broadcasters. Originally offering a customizable player to embed your stream directly into Twitter, it has grown to focus on increasing engagement, posting relevant content on Twitter and driving traffic to your Twitch page.

Kapsuli is a tool that promises to save you time and up your Twitter game. There are lots of services available that provide advanced scheduling for tweets, including Twitter itself. It’s worth noting, however, that Kapsuli is the only service I’ve found directly geared to Twitch. Focusing on increasing engagement, it allows for some automation and pre-scheduling of tweets for your live stream. Getting started is as simple as linking your Twitch and Twitter accounts.

Once signed in, users are greeted with a clean and simple to use scheduling tool. From here you can choose to embed a customizable Twitch player, add tweets to your queue, create saved sessions of tweets to use later, and more. A unique feature of Kapsuli is being able to have certain events trigger the sending of a queued tweet. 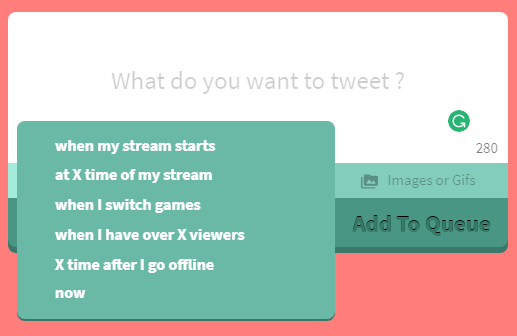 This provides an easy way to set up some engaging tweets to go out at key points during your stream, without needing you to break from what you’re doing. This includes things like sending a tweet when you change games, hit a viewer milestone, or shortly after going offline. The customizable Twitch player has a range of colours to choose from, and several different display modes (such as “Compact”). While viewers will still have to expand the tweet in order to view the player, the idea is people can check in on the stream directly from your feed. Key information such as the stream title, game, and current viewer count are all displayed directly on the player. With a simple click, viewers are directed to your channel and can join the conversation.

You can create saved sessions ahead of time for groups of similar tweets you send out regularly. This might include something at the start, middle and end of your regular broadcast or perhaps something more specific like a marathon event or fundraiser. Complete saved sessions can then be added to the “Live Queue” with a simple click of a button.

The Live Queue offers an easy way see at a glance what tweets are scheduled to go out. Tweets can simply be deleted from the queue or edited if need be. Once a tweet is sent to Twitter it is removed from the Live Queue and appears at the bottom of the screen in the history section. While the history section doesn’t provide very much information, tweets are marked with a green circle if sent successfully and a red circle if there was a problem sending the tweet.

This is the first beta release of Kapsuli, so bugs and missing features are somewhat to be expected. This is the third time I’ve gone back to evaluate what Kapsuli has to offer since first trying the service back in December 2016. Despite the huge potential, in practice, it continues to fall flat. While promising to save time, it has, for me at least, had the opposite effect.

My first attempt at setting up a schedule of live tweets went smoothly, except that my initial “going live” tweet never sent out. The tweet I had set to send 5 minutes after my broadcast ended was also never sent. Unlike the first tweet, however, which appeared in my history log with a red circle, this one was simply gone. The history section itself doesn’t currently provide any useful information beyond the date and whether the tweet successfully sent or not. My second attempt at scheduling a tweet to send “When my stream starts” resulted in the tweet going out immediately. Twice.

Giphy integration, although planned, is several months out. This means your GIFs or images need to be added manually. Once I had successfully created and saved the GIF I wanted to use, upon trying to upload it I was told the file size was too large. As it turns out, there’s a 5 MB limit. Hashtags need to be looked up ahead of time as popular suggestions typically provided by Twitter are not available within the application. Due to certain API limitations, tweets are unable to include mentions. Instead, any mentions are automatically converted to hashtags and the application doesn’t exactly put up a warning to tell you this.

Also, did I mention you need to connect with your Twitch and Twitter in order to log in? Every. Single. Time.

While I desperately want to like Kapsuli, it’s current issues, unfortunately, make this more of a time-sink than a time-saver. We’ll keep an eye on this one over the course of 2018 and be sure to post any major updates that improve the overall experience.