The Vodcast feature has received a lot of criticism over the last month but with all the recent product changes we’ve seen, it’s clear that Twitch is listening. This latest update to Vodcasts makes them easier to identify, gives you more control over hosting, and improves discoverability.

There are now a few ways to tell whether a channel is Vodcasting or Live. The first way displays via the directory as a gray box containing “VODCAST” before the title. The second and less obvious indication is a white dot with “VODCAST” that only appears when hovering over the video. In addition to those, a persistent bar is displayed at the top of the player. This also shows the title of the VOD being broadcast.

Your followed channels list now displays live channels first followed by Vodcasting channels in order of viewers. From the collapsed view you’ll be able to identify Vodcasts simply by hovering your mouse over a channel’s avatar. 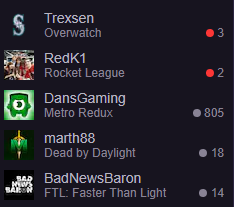 When you go live with a Vodcast, notifications, including emails, will now more accurately reflect this.

One of the larger issues when the Vodcast feature launched was the inability to remove auto-hosting for Vodcasts. Many casters disliked the idea of hosting broadcasters who were not live. This also led to people who were collecting hosts 24/7 which prevented other casters from being in the rotation. This is due to the fact that your host remains active until that channel goes offline. Now you can choose if you want to include Vodcasts in your auto-host rotation or not.

To adjust your Auto-Host settings, go to your Channel Settings page.

Adding videos to your Vodcast meant needing to manually change the game title, or worse, leaving your video miscategorized. This latest update added an “Autoupdate Game Information” option that you can toggle on via the settings cog.

As mentioned in our Communities update, if you have feedback or ideas on how to better improve this feature, you can do so directly through Twitch’s product forum.